I was at Barnes and Noble the other day, poring over Lauren Conrad’s book. Not her fiction book series, but her beauty book. In it, she gives detailed instructions on how to achieve some of her makeup looks and intricate hair styles. It reminded me of the pre-YouTube tutorial days, when people would buy and, rely on, How-To beauty books.

As a writer maybe it’s wrong for me to say this, but it surprises me that people would still turn to a book to get tips on makeup when the YouTube community actually demonstrates move for move how and what to do.

There’s really no contest on which gets the point across better. If I could figure out how to apply eyeshadow from one of these videos than anyone can.

Which of course makes me wonder: if The Hills was still on the air, would this cause some dramatic fight between Lauren and Lo, with one going the book route and one on YouTube?? (probably not. But I really do miss all those dramatic fights.)

Anyway. Speaking of makeup and books, how cute is the cover of this YA novel?? 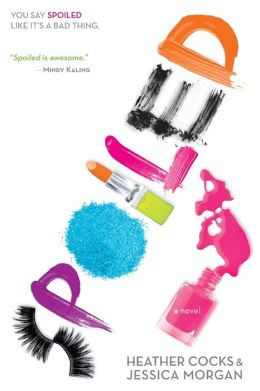 I saw it at B&N, but didn’t buy it. I’m thinking I might soon though based on the great cover. I know we’re not supposed to be judgy with covers but I think, deep down, we all secretly do it.

I’d love to announce that I’ve been doing a lot of #amwriting lately. However, it’s more like, #amreading #amkindofdrafting, and plenty of #amwatchingnickatnite.

In an effort to get into a writerly head, I’ve been trying to think of ways to make the early drafting process more enjoyable. The problem is, the one thing that seems to work for every writer fails me every time:

Writing to music. I am insanely jealous of any writer capable of it. I’m always seeing writer friends tweeting their playlists to help set the mood for a scene and I’m all

Though I’m extremely envious of those who can!

I’ve tried. A lot. I want to be one of those writers. The ones who cue up their iPhones to that perfect playlist and have their characters’ actions become influenced by the songs.

On any given day, I’m just happy when I hit the right keys. My ideas come flying out of my head and my fingers are trying desperately to keep up. And no, I don’t utilize proper finger placement. I’m just going to say it: Mavis Beacon bored the hell out of me (except for that one exciting/stressful game where you rung up grocery store items with the number key pad–anyone remember that? Just me? Okay.) Overall, all of her advice went in one ear and out the other.

Being far from the proper typist, add music to the mix and it becomes more about typing to the beat and suddenly I’m making even less sense than normal in a first draft.

Then I’m thinking, “It’s been ages since I’ve been to a concert. I really hope I can see this band soon…in fact…hmm. I wonder if they’re touring. I’ll just take a quick look over at Ticketmaster…” Then when Ticketmaster produces no results I’ll check Stubhub, and then proceed to rant to anyone who will listen about the unfairness of ticket scalping…

and that’s that. I’m procrastinating again.

So to those of you who CAN write to music, answer me this:

HOW?? Share your secrets. How do you not get overtaken by the songs and have an all-out dance party??

And let’s face it: writer dance parties aren’t as cool as we imagine them to be in our heads.

Also: yes, I have yet another new blog design, and I sort of love it a lot!

The road to publication is super exciting, but there are a lot of highs and lows. And who knows about highs and lows better than the cast of The Hills?

So, without further ado, here is a dramatic interpretation of the publishing process, with a little help from The Hills gang.

At first, it’s super exciting. Think about it: You’ve taken that first step: You’re contacting agents to represent you! You can DO this!

Then the rejections roll in. Kind of fast and very furious.

It’s going to be hard. And you’ll question whether or not you’re crazy to even try.

People will feed into your insecurities.

But then, it happens. You find an agent that loves the work as much as you do!

So many amazing, exciting questions will be thrown your way from every direction. You’ll feel like a celebrity on the red carpet, not knowing where to look or who to answer first.

“How are you going to celebrate??”

But, also like being on a red carpet, you’ll sometimes have some ridiculous comments thrown at you too.

“So are there vampires and werewolves in your book??”

(For the record, I like Twilight!) But no. Mine is a contemporary story with a normal, human girl who falls for a kind-of-normal, human boy.

“Did you have to pay for your agent??”

If you’re paying for an agent, you better run. Because that’s not a legit agent.

“You’re still editing your book??! What does an editor actually DO?? I don’t understand?”

Editors (and I’m including editorial agents in this statement) do just about everything. They help make the work the best it can possibly be. Also, during the all-important acquisitions process, the editor will be the biggest champion of your work to the pub house.

THE VERY NICE AND FLATTERING BUT UNANSWERABLE QUESTION

It can be months–maybe even a year–from the time you sign with your agent to the time you get a book deal. Even then, pub dates tend to change.

You and your agent have done all the necessary edits and now you’re on sub! And you can’t freaking believe it!!

But you also can’t talk much about it. To anyone. It’s like being in the CIA, only way cooler.

Remember how you couldn’t wait to be agented so that you wouldn’t feel like a giant loser when talking about your writing?? And, B.A. (Before Agent), you’d try to avoid the subject of writing altogether? Well, now you’ll want to go back to NOT talking about it. Because now when someone asks “what’s going on with your book?!” you have to go back to this

And then people think you’re being all cagey. But you’re not doing it on purpose. So you try and explain why sub is stressful in the most general of terms, because of the whole top secret CIA thing.

People might not appreciate the vagueness of your explanation.

But whatever. You’ve got bigger stuff to deal with. You’re on sub! And you know that if you got far enough to be on sub, it’s an amazing thing. Because it means your agent’s pitch about your book enticed editors. You’ve learned a lot from querying and you KNOW not to get TOO excited. Not yet, anyway.

You’ve hidden your phone so you won’t be tempted to obsessively check your email. What you forget to take into consideration is that the submission process does something otherworldly to your previously basic human hearing–it makes you develop extraordinary, Pavlovian-style responses to anything remotely close to an email chime or phone ring.

But you know how it’ll be.

Having an agent isn’t a guarantee to an immediate sale. You could go out on a few rounds of sub before nabbing a sale.

Really though. It’s totally fine. Unfortunately, you will hear more of the same paparazzi-style questions being fired every which way in the months between sub rounds. And, if they haven’t already, this batch of questions will really grate your cheese.

“So?” someone will ask with wide-eyed curiosity, “what’s going on with your book??”

And you have to do more of this

And then, as if you weren’t annoyed enough, people start to get annoyed at YOU. And the questions take a sarcastic, snarky, eye-rolly tone.

“But really, what if it never works out?? Do you have a back-up plan for life??”

This is where you need to be careful. Don’t go into a long, teary-eyed monologue about how writing is what you’re meant to do with your entire life, because you’ll only come off as defensive and crazy. So instead just spout off some nonchalant crap about how dreams don’t happen overnight and Rome wasn’t built in a day. Then plaster a smile on and spew out something kind of corny, like,

But you know what?? In the immortal words of Justin Bobby

Yes. Truth and time tells all. Whatever the hell that actually means. In this case, let’s say that in time you’ll get a book deal. Truthfully. And when that happens, celebrate. Just don’t be surprised if people pretend like they never eye-rolled at the long process and try to act like they’ve been excited for you all along.